Dr. Anissa Holmes is voted one of the top 25 women in Dentistry by Dental Products Report. She has effectively mastered the skill of the use of social media with a Facebook following of nearly 50,000 fans. As a Practicing Dentist, Social Media Strategist, Author, Podcaster and Speaker, Dr. Holmes shows dentists exactly how to create a profitable, thriving dental practice which has motivated, inspired team members and patients who are now raving fans. She does this by providing actionable steps to help dentists develop their business culture, their systems and their brand. Dr. Holmes is the host of the iTunes podcast, The Delivering Wow Dental Podcast and is also the author of the book Delivering WOW: How Dentists Can Build a Fascinating Brand & Achieve More While Working Less.

Anissa agreed that there were team members that weren’t agreeable in her vision. She stated that it’s very interesting because she really believes now that she is in a different realm and working with business owners and dentists and a lot of them have fear. Fear that the team is not going to buy into this whole creating an amazing experience culture and so what happens is that they do nothing. What she always says is that if you are a business owner, it’s your business, it’s your vision and her team is very aware for example if they have 100 things that have to happen to be able to create amazing experiences or to have consistency in the quality of work that they do or to make sure they are seeing people on time. These 100 things have to be done and if she could do them all by herself, she would have no reason to hire someone and she can keep that money in her pocket but she made a decision that all of these things need to be done, so there are different people that need to do it and the job has to be done and this is the vision of this company and it’s okay if you don’t feel like this is the right company for you but at the end of the day this is the company, these are the values, this is what we are working for. Anissa stated that when they first decided that they are going to be known for delivering an amazing experience, some people that was working at the practice said “okay, we are willing to try” they are still there and they are happy and they are making more money than they have ever made. This year January they had the entire team write down what it is that they are going to achieve, she put down her dream to go to Europe and have gone to Europe, 4 of her team members actually got cars this year which is a huge deal for people working in small businesses in Jamaica to be able afford a car. They have had amazing things happening and it’s because she aligned with her team members, she told them from the very beginning, if you they help her grow this business, you are going to develop personally, you are going to impact your family, achieve all your personal dreams and those that bought in with her, they are definitely living their dreams and some people it wasn’t for them and that was okay and she was okay to let them go.

Even along the road she has had different people and had to increase her team, just a few months ago they were testing someone for their new Dental Assistant, they needed to add a new Dental Assistant and someone came in, she was an assistant at another practice and she says “You mean I have to give a tour?” And that’s something when they look at their reviews, people constantly mention that – customers say “I can’t believe that I am getting a tour before my procedure”, and so this person was clearly not going to fit into the vision and the culture of the practice and so she just didn’t work out.

Dr. Anissa Holmes stated that hiring for the right profile, they do that and they look at DISC testing behavioral style, for example, if their Hygienist is very outgoing in terms of her behavioral style, they want someone who has the profile of being a very sensitive, very compassionate type to be her Dental Assistant and so they kind of have that balance, the person who does their training of Dental Assistants has a different style and that’s part of it. The other part is that once you start to be knowing for having a certain type of business, those sort of people are going to be attracted to your business and so they are now finding that a lot of their new hires are actually coming to them saying that they know about their business already, they have been following us on Facebook or people are talking about them in the community and they want to work in their practice and so it’s that sort of the mindset of the people and again, once they come in having that training and so most people are not trained on understating that they way you connect with people is not by necessarily talking, it’s about listening and a huge part of their training with all of their team members is understanding the importance of listening, of asking questions, so you can get to the heart of the matter.

For example, in dentistry, a lot of people may say, “I don’t want a crown” some dental offices or dentists around the world will say in their mind, ”They don’t want it because they can’t afford it” or “They don’t want it because they are afraid” but you are not asking them why they don’t want it and you just move on and you miss out on that opportunity to help them. Dr. Anissa Holmes stated that what they do in her practice they will say “Why don’t you want that crown?” and they may say, “The reason why I don’t want it is because my daughter is getting married next month and so I just don’t have any money right now”, and you can say, “Will you be ready in a few months?” and then they say “Sure” and you say “Okay, great, just write it down and when you come back for your next cleaning then we’ll go ahead and have it sorted out then” or they’ll say “I don’t want it because I don’t think I need it” and then you can say “Okay, let’s talk about why or what happens if you don’t do it. In my experience of practicing for so long this is what happens and so if you don’t fix the tooth, what’s going to happen is that you’re going to be out one day and you’re going to bit down and it’s going to break, it’s going to split, you’re going to have to take it out, it’s going to be more procedures, more cost and based on the condition, you are in a 80% chance that that’s going to happen to you, are you okay with that?” The person is going to think and say, “You’re right, I need to do it.”It’s all about training your team, letting them understand how that happens and when they see it happening over and over again, in terms of people making decisions to have a purchase or do treatment because of asking questions, they buy into it.

New Online Course – Mastering Customer Experience and Increasing Your Revenue – A Must Have Course for all Business Owners, Entrepreneurs – Videos, PDFs, Worksheets, Exciting Content that can help your business make more money and increase customer retention 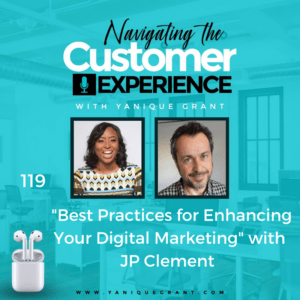 JP Clement is the CEO of boomtime. He has over 30 years of experience in marketing, digital strategy and product management for companies ranging from startups to 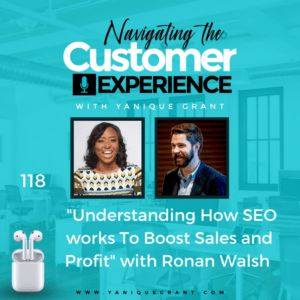 Episode 118 : Understanding How SEO works to Boost Sales and Profits 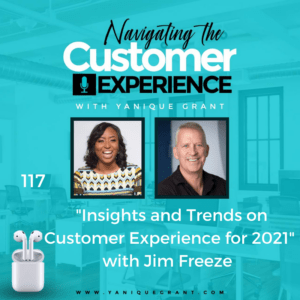 Episode 117 : Insights and Trends on Customer Experience for 2021

Jim Freeze is the Chief Marketing Officer, and he focuses on brand strategy and awareness, thought leadership, product marketing, demand generation, creative services and public and 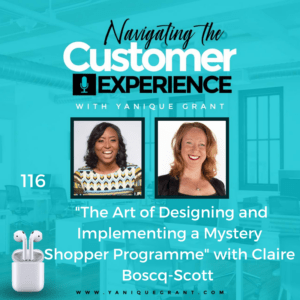 Episode 116 : The Art of Designing and Implementing a Mystery Shopper Programme

Claire Boscq Scott is a wonderful entrepreneur and she is a mystery shopping and Customer Service specialist. Claire lives to inspire global businesses to thrive by

PrevPreviousEpisode 029 : The Experience Economy : Business is Theatre with Jospeh Pine II
NextWhat is Your Culture? Is it What You Say or What Your Customers and Employees Say……Next